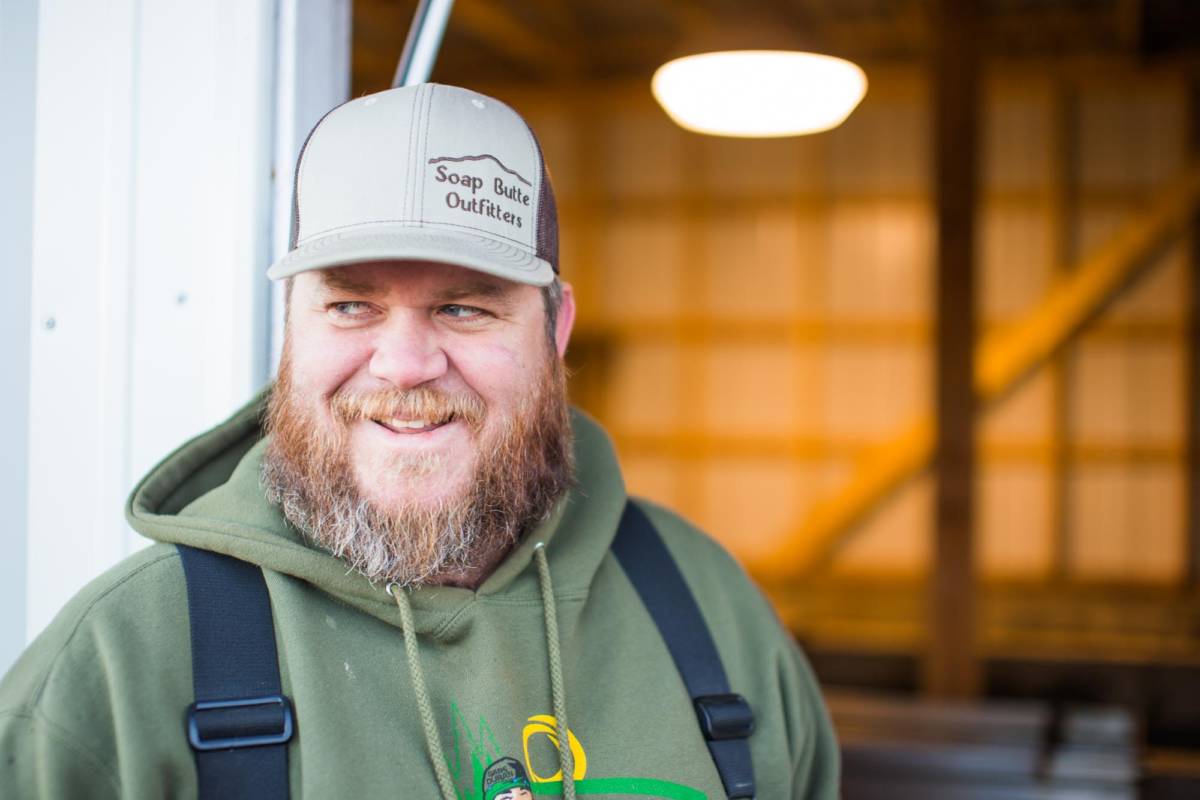 California may be known by today’s youth as the home of Facebook, Google and Apple but for generations, the Golden State has built an industry on which Americans rely to eat. Its $50-billion agricultural sector remains the biggest in the United States, with produce ranging from dairy to fruits, nuts and seafood.

Temperate climate, rich soils, a hardworking labour force and access to markets are but a few of the qualities that make agriculture flourish in the state.

Mt. Lassen Trout and Steelhead Farm is a beneficiary of that natural bounty and a benefactor to the state’s economy.

Nestled in the foothills of Mount Lassen in Northern California, the family-owned trout farm has been providing urban dwellers American-farmed trout for the past five decades.

ADVERTISEMENT
“We’re roughly three hours from San Francisco. So when we take these fish into the Bay Area, they were swimming just hours before they get down to a distributor there,” says Katie Mackey Harris, a second-generation trout farmer and the farm’s general manager.

Being a farmer in California has a lot of implications. As the state’s Department of Food and Agriculture acknowledged: “California agriculture is the most highly regulated in the nation and probably the world.” Ensuring the continued health of the state’s agriculture and, by extension, the United States’ food security is at the core of those draconian measures.

While undeniably tough and expensive to comply with, they have made companies such as Mt. Lassen Trout Farm better from a sustainability standpoint, says Harris. “Everything, from our water quality to the trucks that we use to deliver our fish, has to be in compliance,” she says.

Those measures pay off because they give California-farmed fish desirability, says Harris’s father Phil Mackey, who is instrumental in growing the company into the state’s largest trout producer.

“Our product is being sold to a fairly well-educated consumer, and what we found is that almost everybody knows that California is probably one of the most heavily regulated places anywhere and so these educated consumers, they’re saying, ‘Well if it’s raised in California then it must be safer.’ And that’s what’s driving a lot of the market. It’s the safety of the product they’re going to serve to their family,” says Mackey.

Ahead of the curve

Mt. Lassen Trout is a triple threat in aquaculture given its presence in three market segments: it supplies its fish to the seafood and recreational markets and it plays a role in the restoration of the endangered winter-run Chinook salmon as part of a watershed restoration project.

Founded in 1949 by a previous owner, Mackey took over the company’s ownership in the 1980s, marking a full circle moment for his career in aquaculture. “I really had no desire to go to college. I wanted to get into an occupation that was outdoors. Then I heard about a fellow who was in the broodstock side of the aquaculture world who was looking for a young guy to train. So I talked my way into a job with him and have been here for just about 50 years now.”

He worked for about eight years alongside the original owner who mentored him on genetics and raising fish.

“We developed our broodstock program and we were one of the world’s largest trout egg producers at one time. We were selling trout eggs in the United States and 27 other countries and provinces. Then due to a set of circumstances in his personal life, he decided he wanted to phase out. So I began a buy-out of him back in the late ‘70s. He was a great guy, he was my mentor,” he says.

The following decade, the company undertook a very intense research program to respond to a market need for year-round supply of trout. Through the use of photoperiod control, they were able to develop high-quality rainbow trout eggs for the industry, enabling it to supply trout to the retail market throughout the year – just like chicken, pork and beef suppliers do – and in consistent sizes.

“A key part of what we do here is our genetic selection program of our in-house strain,” says Mackey. “We have maintained our broodstock since 1949; we have bred a top-performing fish that absolutely thrives in this environment. No one else in the world has our strain of trout. I doubt there could be a fish anywhere else that we could bring in that would do as well as our fish do in this environment.”

The company’s remarkable achievements are borne out of Mackey’s hard work and determination to learn. “If I have a claim to fame in my 50 years in this business, I would tell you that I bet I’ve made more mistakes in photoperiod control than anybody else in the world,” he quips.

To this day, Mackey remains hands on in the company’s R&D pursuits. “Some of the primary stuff we do regularly are statistically significant feed trials that are mostly done in triplicate to continue to test feeds, to compare growth rates and conversion rates with the primary feed companies that we’re purchasing our feed from. The rest (of R&D work) has everything to do with our continued genetic selection program.”

This includes the continual evaluation of performance of different lines as well as hybridizing lines to measure the effects of heterosis or hybrid vigor, he says. “It’s just a constant tracking program and performance indices that tell us which strains are doing better within our own strains of fish.”.

A product of the environment

Aside from providing the farm with scenic beauty, Mount Lassen supplies the farm with pristine springwater, which is always a great asset in fish farming.

“I get to look at Mount Lassen every single day,” says Harris who has taken over in running the day-to-day operations of the farm from her father. She also serves as the company’s president. “There are a series of farms around here that all look different from each other but are all based on the springwater source. The volcanic country up here and the springs are part of our story. The amazing product we have is a result of the environment around us,” she says.

That springwater has a lot to do with the choice to raise trout, says Mackey. “Trout is the most logical choice for the springwater conditions here in our area because the temperature of the water coming right out of the springs ranges from 10 C to about 14 C. We virtually have no wild fish in our water supplies and so that eliminated a whole bunch of the challenges from a pathogen situation.”

How that water is used and reused boosts the farm’s sustainability credentials. Harris notes the water that flows through the facilities is considered non-consumptive, meaning it could be put to additional use and does not diminish the source.

“The water is not only used for the rearing of the trout but also for irrigation purposes to raise a crop of hay or for livestock as part of the responsible use of this resource on ranching properties.”

Good old-fashioned gravity does the work in bringing in the water into the facility, helping it save on energy costs.

“I often joke to people that we subscribe to the philosophy that water runs downhill. So it comes in and flows down and we are re-aerated by the spill of the water. It’s a very, very typical kind of an old-fashioned trout farming setup,” says Mackey.

It wasn’t always, though. Through the years, the system was engineered and re-engineered until it dawned on them that a simple setup was actually the “ideal.”

“We started out with hatching troughs similar to what the State of California system used back in the ‘50s. We experimented with circular tanks. We’ve gone through a variety of changes over time and tried to come up with the most efficient designs for us.” In the end, it was the “most basic simple design” that ended up producing the best fish possible, he says.

Harris adds: “It’s keeping it simple to where it’s easy to clean; hygiene obviously is one of the most important things with juvenile fish. It’s really keeping it simple, keeping it very easy to maintain – was what was best.”

With drought in California growing more intense in recent years, it is threatening the state’s already shaky water supply and the future of farming operations.

“Right now in California, we’re in the second year of a severe drought coming off of a five-year drought a few years ago, so water flows even though they’re spring-fed the aquifers have not been replenished. But we’re expecting to see a reduction in waterflows and so that is always a challenge. We’re looking at technology to implement possibly the use of some oxygenation solutions, etc.,” says Mackey.

Today, the farm has the capacity to produce 500 tonnes of trout annually. Around 75 to 80 per cent of the farm’s sales go to the recreational fishing market while the rest go to the seafood market. Harris hopes to achieve some balance in these two markets.

“COVID precipitated a huge increase in demand in recreational fishing and a dramatic drop in seafood sales. Fortunately we were in a position to be diversified. We hope to break those numbers up to where they’re a little more proportioned by making a lot of concerted efforts to increase our presence into the seafood side of the market,” says Harris.

Harris is waiting for permits from the state to add a processing plant to the farm’s operations so it could sell its product directly to market instead of relying solely on distributors. “The way people buy food has changed with the pandemic so we need to change how we sell as well. A processing plant will allow us to do that.”

She foresees the recreational fishing market to cut back a little in a post-pandemic world. “I’ve heard story after story of a grandfather who takes his grandson or granddaughter out and goes fishing. I hope that continues. I think the rec market has a very bright future for the short term, certainly. But I do expect to see a slight drop-off mostly as sports come back online and families are going back to playing baseball rather than going fishing.”